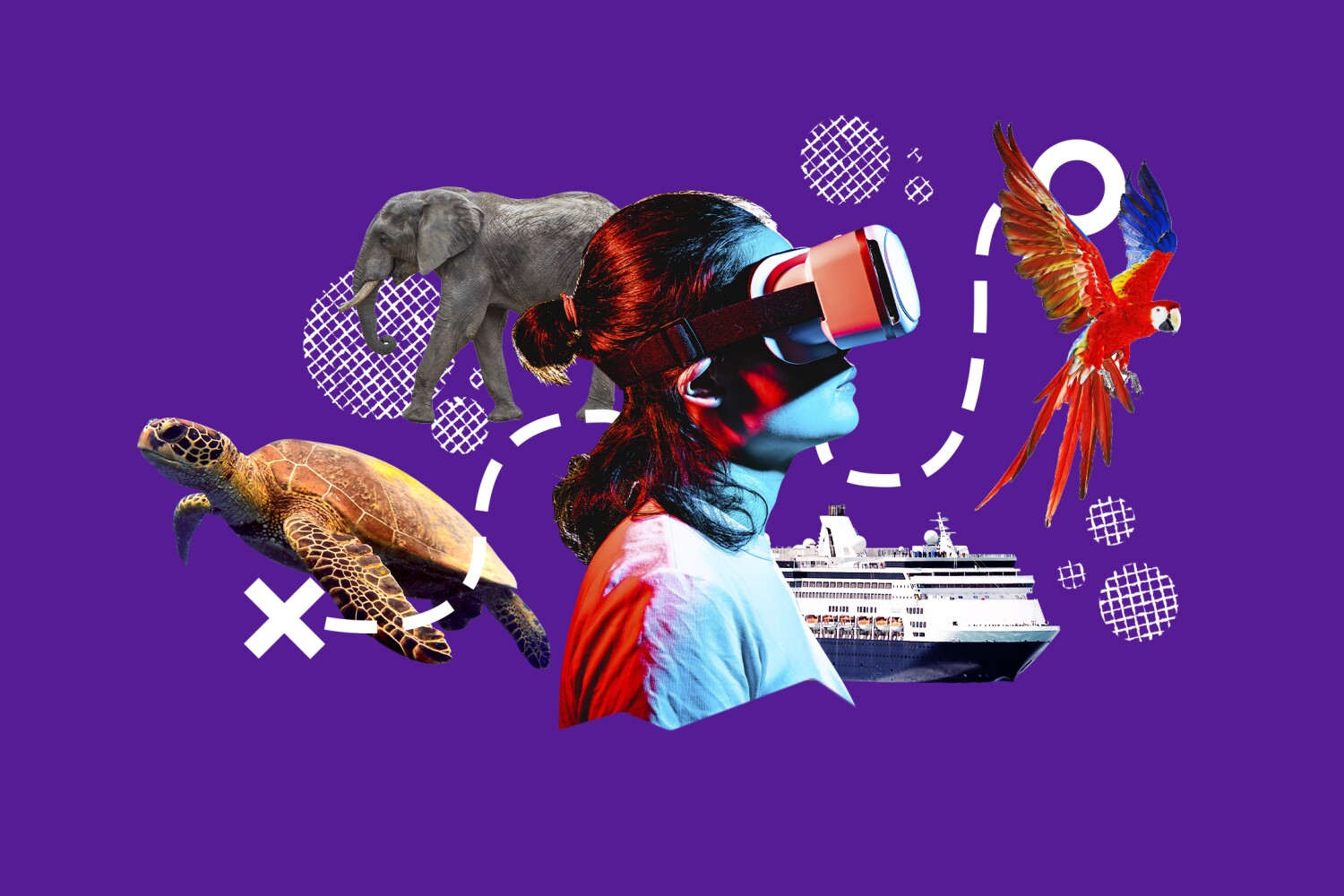 I scared myself silly the other night on a Gangsters and Ghosts walking tour of Chicago.

The evening was frosty — a slurry of snow and rain swirling through the air — and the scene eerie, a deserted walkway along the Chicago River, dark waters lapping at the bank. My tour guide, Lauren, told spine-chilling tales about jilted lovers, murderous masterminds and fires that killed hundreds as we moved from the river to other spirited hot spots downtown.

“Why do you enjoy telling such grim stories?” I asked.

”I’m a history buff with a master’s degree,” she said. “I love the stories. And Chicago has a lot of scary ones.”

Although it was 28 degrees, I wasn’t chilly. That’s because I was in my Southern California home, not in Chicago. I was using a new live-streaming service called Amazon Explore. Sign up for a tour and do it one-on-one with a guide. It’s a fresh form of virtual reality. It doesn’t just show videos of places and things; it allows you to interact with the place and its people.

Amazon Explore and a new Airbnb virtual reality service hit the marketplace at the ideal time. When the pandemic struck and travel screeched to a halt, globetrotters felt deprived: They couldn’t swim with sea turtles in the South Pacific or laugh at spider monkeys cavorting in the Costa Rican jungle.

Some people said they had hit a COVID-19 wall and felt as though they’d never travel again.

Enter the new VR services, which are cheap and fun, allow you to dream — and plan — where you’ll go when travel becomes safer. They’re part of an evolving communication system that changed our lives in 2020, the year that two-way video became our primary social channel. We‘ve Zoomed to parties, meetings, family gatherings and exercise classes. Why not interesting locales?

Video was evolving even before the most recent virtual reality advances. National Geographic, for instance, offers stunning photography and virtual travel in its 360VR series the Okavango Experience, in which users join researchers on an expedition through Africa’s Okavango Delta, one of the world’s last wild places.

Among other NatGeo 360-degree videos is a striking visit to Antarctica with photojournalist Paul Nicklen. (Don’t get seasick while the ship fights its way through rolling seas.)

The 360 technology gives viewers an immersive experience because they can look in various directions, thanks to omnidirectional cameras used to film the scenes. Many destinations now have their own 360 videos. Oregon’s Crater Lake National Park, for instance, has a 360 VR tour with singer-songwriter Dierks Bentley.

Webcams are another popular form of virtual travel. They can be fun to watch if your timing is right. You might be able to track sharks as they slide through the water at Monterey Bay Aquarium or watch koalas chowing down on bamboo at the San Diego Zoo. But if the koalas are nodding off in the corner, tuning in can be disappointing.

I checked out 10 webcams that are said to be some of the most popular in the nation, but they were all snoozers when I looked, including Yosemite Falls, which has only a trickle of water flowing at this time of year.

Another type of virtual travel takes the form of VR headsets and is definitely not a snoozer. If you want to lose yourself in a jaw-dropping virtual world, this is the place. The headsets have largely been marketed to the gaming industry, but travel destinations are jumping aboard. I tried a new Oculus Quest 2 and explored the savannas of Kenya, complete with a herd of elephants and a pride of lions. It felt as if I could reach out and touch the wispy eyelashes of one of the baby elephants.

Of course, I couldn’t really do that. Or ask questions. But the new virtual reality tours from Amazon and Airbnb can be counted on to provide entertainment and a human being who will answer your questions during a live-streamed tour.

Amazon Explore set up its platform in the fall, offering live one-on-one experiences with guides, chefs, artisans and shopkeepers from all over the world. Take a virtual rickshaw ride in Tokyo ($49), learn how to make Mexican salsas ($39) or visit rescued wildcats at Las Pumas Rescue Center in Costa Rica ($28). Feel like buying souvenirs? There are sessions for that too. (After all, it is Amazon.)

I checked on the Las Pumas wildcats during a session with Francis Taylor of Central American Tours, a family-run company in Guanacaste, Costa Rica. Taylor showed me around the sanctuary, which cares for jaguars, cougars and ocelots as well as nonfelines such as sloths, monkeys and macaws.

Hundreds of wounded animals come to the center annually, he said. Most are rehabbed and sent back to the wild, thanks in part to funds raised from tourists. “But nobody is traveling now. The Amazon Explore tours are keeping us in business,” Taylor said. Another plus: “Online tours like ours are a low-cost way to check out a place you might want to go in the future.”

Earlier this year, Airbnb got into the market when it launched Online Experiences. The Zoom-style tours offer a lot of variety; you can go to a flamenco class with a Spanish dancer in Seville ($13), learn how to make gnocchi and ravioli with a Florentine chef ($36) or explore Barcelona, Spain ($14).

I opted for the Barcelona tour. The guide was knowledgeable, but unlike Amazon’s Chicago tour, we weren’t actually exploring the city. We were in a room while guide Christian Heide showed still photographs of various city highlights such as the Gothic Quarter and Gaudí’s Basílica de la Sagrada Família. He gave food and drink recommendations and answered questions. There was also another couple on the online tour; my Chicago tour was private.

Did I feel as if the Amazon and Airbnb tours took me to a new place? In both cases, yes, but Amazon’s walking tour did a better job of helping me lose myself in another world. It also allowed me to take photos during my tour by using a camera icon at the bottom of the live stream.

Because Amazon’s product is new, there are some limitations. It isn’t mobile-friendly yet; you’re required to have a laptop or desktop, an internet connection, speakers or headphones, plus a Chrome, Edge or Safari web browser. Airbnb tours can be done on laptop, desktop or mobile and can be set up for groups.

Bottom line? Both companies’ online tours are inexpensive ways to carry people away when their mobility is limited. Or to help armchair travelers get ready for the day they’ll be able to hit the road again.

Brooklinen’s Prime Day 2020 Deal: Everything You Need To Know

5 ways Elvis Presley can help you get through the pandemic