SportsPulse: NBA free agency is upon us and what better way to celebrate than to call in USA TODAY Sports’ Jeff Zillgitt to highlight some of the most memorable player movement in league history.

Following an unusual season that was suspended in March because of COVID-19, restarted in a bubble in Orlando, Florida, and concluded just more than a month ago, free agency began only a month before the next season is scheduled to start on Dec. 22.

There are many big names and not a lot of teams with salary-cap space, but free agency should be busy as teams want to put together rosters in advance of training camps, which are slated to open on Dec. 1.

Here are players who reached deals with teams during free agency:

Restricted free-agent guard De’Aaron Fox has agreed to a five-year, $163 million extension with the Sacramento Kings, The Athletic reported. This gives the Kings a long-term solution at point guard. Fox, 22, is one of the talented young playmakers in the league. He averaged 21.1 points, 6.8 assists, 3.8 rebounds and 1.5 steals while shooting 48% from the field. Fox can improve his 3-point shooting, but it’s obvious the Kings and first-year GM Monte McNair are believers. The deal, according to ESPN’s Bobby Mark, could increase from $170 million to $196 million if Fox makes first-, second- or third-team All-NBA and the salary cap continues to increase.

Forward Danilo Gallinari, one of the prizes in this year’s free-agent class, plans to sign a three-year, $61.5 million contract with the Atlanta Hawks, according to a person familiar with the agreement. The person requested anonymity because he was not authorized to speak publicly until the deal is official. Gallinari, who turned 32 in August, had a fine season for Oklahoma City in 2019-20, averaging 18.7 points and shooting 40.5% on 3-pointers. Atlanta is trying to accelerate its plan by adding more talent and compete for a playoff spot this season.

Forward Jerami Grant reached a three-year, $60 million deal with Detroit, a person with direct knowledge of the deal told USA TODAY Sports. The person requested anonymity because he was not authorized to speak publicly until the deal is official. Agent Mike Kneisley negotiated the deal. New Pistons GM Troy Weaver continues to make significant changes. Grant leaves Denver, which had a similar offer ready to present.

Washington forward Davis Bertans will remain with the Washington Wizards on a five-year, $80 million deal, a person familiar with the details told USA TODAY Sports. The person requested anonymity because he was not authorized to speak publicly until the deal is official. The Wizards wanted to keep Bertans, an outstanding 3-point shooter, and went out of their way to make sure he stayed in D.C.

Brooklyn’s Joe Harris developed into one of the league’s best 3-pointer shooters last season, shooting 42.4% from that range. Brooklyn made sure he stayed, reaching a four-year, $75 million deal with the Nets, his agent, Mark Bartelstein, told ESPN. 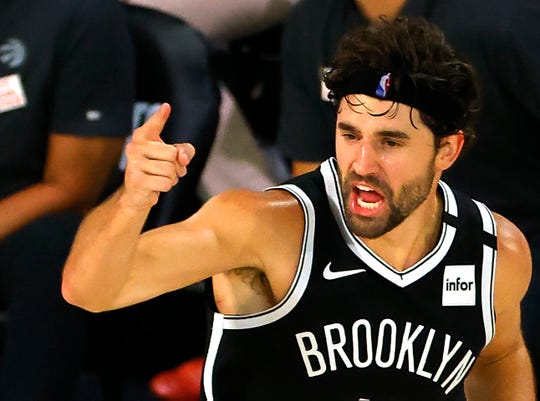 Guard Goran Dragic is headed back to the Miami Heat on a two-year deal worth $37.4 million, according to a person with direct knowledge of the situation. The person requested anonymity because he was not authorized to speak publicly. The second year of the deal is a team option. This was not an unexpected deal as the Heat and Dragic were on the same page. Dragic, who struggled with a plantar fascia tear during the Finals, averaged 16.2 points and 5.1 assists and shot 44.1% from the field for Miami last season. The Heat consider Dragic a key piece of returning to the Finals.

Guard Wesley Matthews agreed to a one-year deal with the Los Angeles Lakers, a person with the details told USA TODAY Sports. The person was granted anonymity because they were not authorized to discuss the news before it was official. The Lakers acquired Matthews on their bi-annual exception worth $3.6 million.

The Lakers were looking to add wing depth after trading Danny Green and the No. 28 pick to Oklahoma City for Dennis Schröder. The Lakers are also expecting to lose Avery Bradley after he declined his player option.

Mason Plumlee agreed to a three-year, $25 million deal with Detroit, his agent Mark Bartelstein said. The addition gives the Pistons frontcourt depth. Plumlee averaged 7.2 points and 5.2 rebounds in 17.3 minutes per game for Denver last season but had a diminished role in the playoffs. New Pistons general manager Troy Weaver continues to reshape the roster following a draft in which the Pistons had three first-round picks.

Guard Jordan Clarkson agreed to a four-year, $52 million deal to stay with the Jazz, a person familiar with the deal told USA TODAY Sports. That person was granted anonymity because they were not authorized to discuss the deal before it was official.

The Jazz acquired Clarkson last season in a deal for Dante Exum, and Utah has since become pleased with his consistent bench scoring. Clarkson averaged 15.6 points on 46.2% shooting.

Dwight Howard, who won his first championship last season with the Los Angeles Lakers, will join the Philadelphia 76ers, a person with direct knowledge of the agreement told USA TODAY Sports. The person requested anonymity because he wasn’t authorized to speak until the deal is official. Howard resurrected his career with the Lakers, averaging 7.5 points and 7.3 rebounds in 18.9 minutes per game. He will be a solid backup for Joel Embiid as new Sixers president of basketball operations Daryl Morey reshapes the roster. 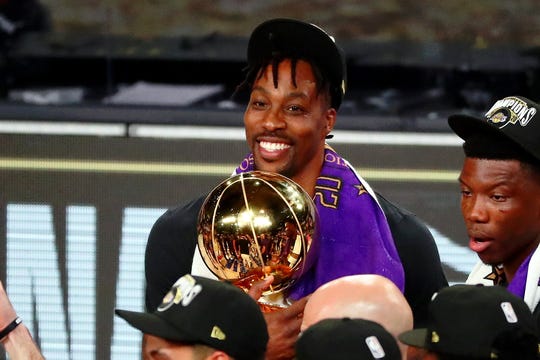 Guard Rodney Hood agreed to a two-year, $21 million deal to return to the Portland Trail Blazers, a person with knowledge of the details told USA TODAY Sports. The person was granted anonymity because they were not authorized to discuss a deal that is not official. The person added Hood’s second year on his contract is non-guaranteed.

The Blazers have shown trust and loyalty in Hood after he injured his left Achilles tendon 21 games into last season. Hood averaged 11.0 points on 50.6% shooting and 3.4 rebounds before his injury.

Derrick Favors, who played for New Orleans last season, will sign a contract with Utah, a person with direct knowledge of the deal told USA TODAY Sports. The person requested anonymity because he wasn’t authorized to speak until the contract is official. Favors played for the Jazz for eight-plus seasons before switching teams.

Meyers Leonard reached a two-year deal with Miami, according to The Associated Press.

Dwayne Bacon agreed to a two-year deal with Orlando for nearly $3.3 million, a person with direct knowledge of the deal told USA TODAY Sports. The person requested anonymity because he wasn’t authorized to speak until the contract is official.

Patrick Patterson will re-sign with the Los Angeles Clippers on a one-year deal, his agent Sam Goldfeder of Excel Sports said.

MLB Commissioner Confident League Can Get Through Season, Playoffs Despite Coronavirus