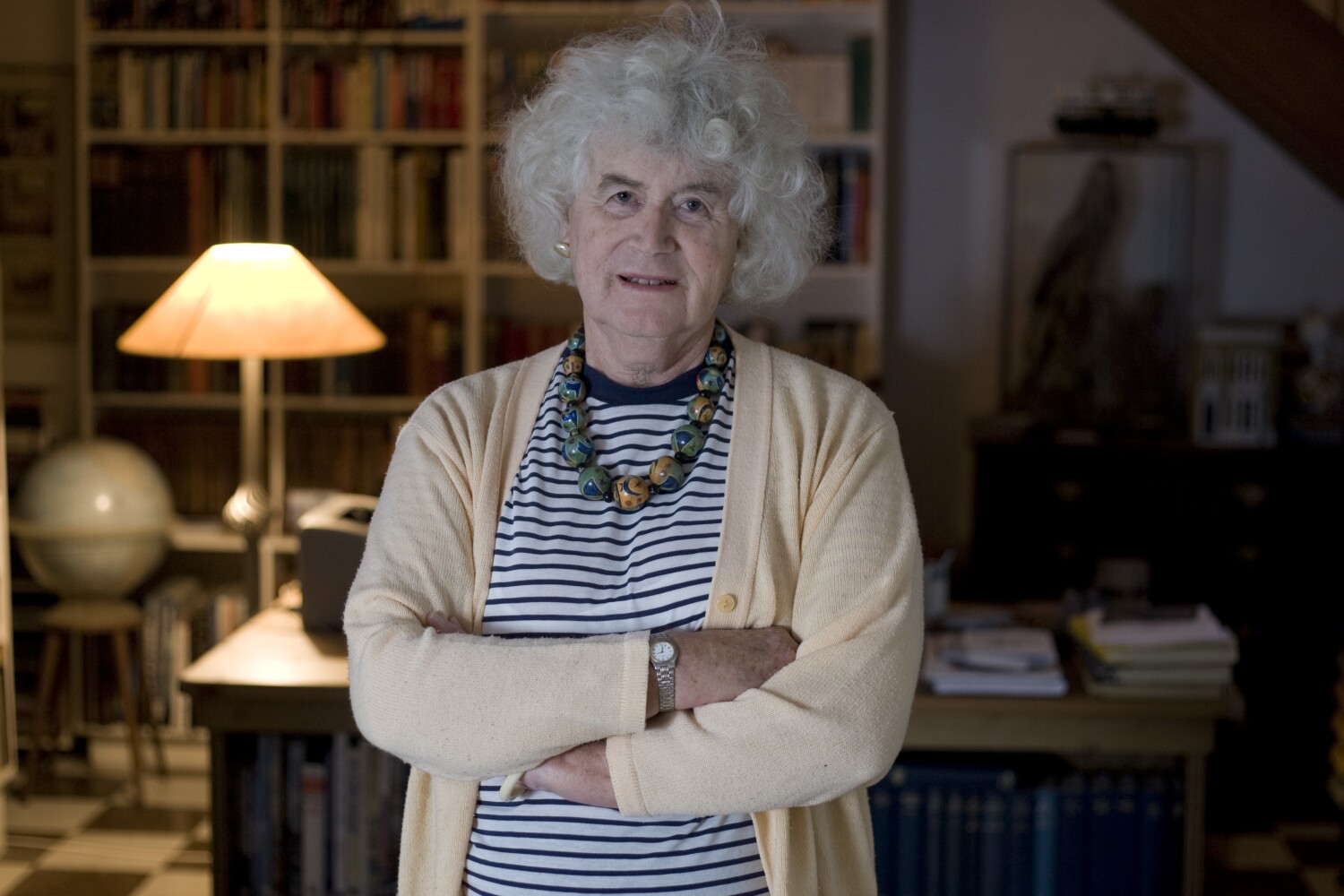 Jan Morris, as witty, learned and enthusiastic a traveler as ever there was, died Friday, at least 24 years after selecting her tombstone.

She was 94, a devoted resident of Wales (where she died), a celebrated historian, journalist and transgender pioneer.

As obituaries around the world will note, she unlocked secrets of Venice, Oxford, Trieste, Spain, Hong Kong, Manhattan, Mt. Everest and scores of other locations in dozens of volumes of history and travel.

Morris also served as an essayist for Rolling Stone magazine, wrote a trilogy on the rise of the British Empire and devoted an entire volume to a Mediterranean destination, Hav, that was eerily compelling and entirely imaginary.

“Jan was just so self-contained. She loved places and she loved people. But I don’t think she needed to have company to enjoy herself,” said Michael Shapiro, a Bay Area writer who interviewed Morris several times and included her in his 2004 book, “A Sense of Place.”

Added Shapiro: “Jan believed in everybody charting their own course. She certainly did. What a magnificent, indomitable life.”

By the time my wife, Mary Frances, and I met her in 1996, she looked and behaved like your favorite aunt. She was, as I wrote, a tall, white-haired woman, 69 years old, robust, quick with a quip and inclined to tear across the countryside at high speeds in her Honda Prelude.

“I find this landscape unmatchably beautiful,” she told us. “The scale of it! And how it changes every half hour. I’m always comparing places to it.”

We’d come because I was writing a magazine story about Wales. When I wrote ahead to ask for a few moments of her time, she invited my wife and me to lunch at Portmeirion.

We were charmed, of course. Supreme self-confidence. No pretense. And the career of Jan Morris, we knew, was only the second act in the writer’s story.

Morris was born James Morris, son of a Welsh father and English mother, studied at Oxford, served in the British Army and became a star reporter at the Times of London, a tenure that included a global scoop on Edmund Hillary and Tenzing Norgay’s 1953 conquest of Mt. Everest. To get that scoop, Morris followed the great climber 20,000 feet up, and sent a key message in code, to keep the news exclusive.

Yet through all of those years, including marriage and fatherhood, Morris knew something was not quite right. As she later wrote:

“I was perhaps three or four years old when I realized I had been born into the wrong body, and should really be a girl.”

Those words come from “Conundrum,” the author’s 1974 account of the journey from manhood to transgender womanhood. That voyage included first hormone treatment and later an experimental operation in North Africa, at a time when the phrase transgender was rarely heard.

From then on, through several more memoirs and many books of history and travel, the author was Jan, not James. And the words were sharp as diamonds.

Here she is on Las Vegas in the 1980s: “Las Vegas sometimes reminds me of the terrible little towns of inner Sicily or Sardinia, where half of the population consists of murderers, kidnapper or extortionists, and the other half pretends not to notice.”

On La Paz, Bolivia: “It is a tumultuous, feverish, often-maddening, generally harum-scarum kind of place, but nobody with an eye to country or a taste for drama could fail to respond to its excitements, or resist the superb improbability of its situation.”

And there’s this on Trieste: “There are people everywhere who form a Fourth World, or a diaspora of their own. They are the lordly ones. They come in all colours. They can be Christians or Hindus or Muslims or Jews or pagans or atheists. They can be young or old, men or women, soldiers or pacifists, rich or poor. They may be patriots, but are never chauvinists. They share with each other, across all the nations, common values of humour and understanding. When you are among them you will not be mocked or resented, because they will not care about your race, your faith, your sex or your nationality, and they suffer fools if not gladly, at least sympathetically. They laugh easily. They are easily grateful. They are never mean. They are not inhibited by fashion, public opinion or political correctness. They are exiles in their own communities, because they are always in a minority, but they form a mighty nation, if they only knew it. It is the nation of nowhere, and I have come to believe that its natural capital is Trieste.”

After our lunch at Portmeirion, Morris asked us to join her at the 18th century farmhouse she shared with her partner (previously her wife) Elizabeth, who survives her.

There, Morris told us that her father was Welsh, her mother English; but she’d always identified with the Welsh half. In fact, she confessed, in the early 1990s, in a ceremony rich with flowing robes and Druid overtones, Morris had been installed as a Bard of the Gorsedd, the most prominent cultural organization in Wales.

Over tea, Jan and Elizabeth talked about the adventures of their grown children, the kite-flying of a grandchild, the resurgence of the Welsh language.

“All these things are happening,” Morris said. “And all these people who speak only English have no idea they’re happening.”

I think one of us said that for somebody in the business of going away, she seemed partial to home.

Always a believer in bold gestures, Jan couldn’t resist telling us about the gravestone that she’d already had chiseled for them. They kept it beneath the stairs.

Atop her roof, meanwhile, Morris had placed a custom-made weather vane: Two of its compass points were labeled with characters from the English alphabet, two from the Welsh.

Continuing the tour, she led us along a path beneath oak, ash and sycamore trees, then paused for dramatic effect.

“Down here,” she announced with a wave of her arm, “is my grave. On a small island in the stream.”

May the island endure and the stream run.

Stop Trying To Live Like We Aren’t In A Pandemic

The Four PercentThe Four Percent In the early days of the coronavirus pandemic, many of us had high hopes for the summer: “Maybe by the time the kids are off for summer break, the virus […]